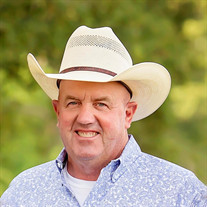 William Scot Nevill, 54 of Iola, passed away Monday, May 3rd at CHI St. Joseph Hospital in College Station. Visitation with family and friends will be held from 5:00 – 7:00 pm, Wednesday, May 5th at Nobles Funeral Chapel in Navasota, Texas. A celebration of his life will be held at 2:00 pm, Thursday, May 6th at Bedias Baptist Church with Jerry Cole officiating. Interment will follow in Cross Cemetery in Iola. Arrangements are under the direction of Nobles Funeral Chapel. Scot was born in Bryan, Texas on July 19, 1966 to William and Joyce (Oswald) Nevill. He attended and graduated from Iola High School in 1984 and then enrolled in Henderson County Junior College, where he played basketball and earned his associate degree. He went on to play basketball for Stephen F. Austin University for a year before transferring to Sam Houston State University, where he would obtain his degree in animal science. He met and married the love of his life, Dedra Anne Picou on January 21, 1995 and together they had three children. Scot followed in the footsteps of his father and grandfather and became a third generation cattle rancher, supporting his family by doing what he loved. He also partnered in a rodeo company, Apache Rodeo Co., until buying out his partner and renaming it to Scot Nevill Rodeo Company. Scot was a true, devoted family man. He was hands on and dedicated to providing for his family and supporting them in every endeavor. He faithfully attended every school or sport function they participated in, offering his love, encouragement and support in everything they did. A strong, silent man, Scot was a man of few words but strong convictions. He was kind, patient and honest and offered sound advice to those closest to him. He was a hard worker and steadfast provider for his family. His entire life was centered and dedicated to them. Each year, Scot, Dedra and the children vacationed in Florida. He loved the beach, and for over 20 consecutive years, he relaxed and would unwind, just soaking up the sun and joy being surrounded by those he loved most. Many, many family memories are centered around those annual vacations. Scot was also active in things close to his heart and community. He served on the school board for Iola Independent School District and was in his second term as vice-president. He was also serving his second term on the Grimes County Appraisal Board and the Brazos/Grimes/Walker and Burleson County FSA Board. Left to cherish his legacy and memory are his wife, Dedra Anne Nevill; son and fiance Will Nevill and Logan Choiniere; daughters Tatum and Taylor Nevill; parents Joyce and William Nevill; sister and brother-in-law Jo Lyn and Jed Haby; mother-in-law and father-in-law Jan and Thomas Picou and; sister-in-law and brother-in-law Lillian and Tom Picou; sister-in-law Karen Picou; brother-in-law Vincent Picou and many that he was proud and honored to call his friends. Serving as pallbearers are Tom Picou, Lance Broesche, Curtis Luthe, Trae Poe, Herman Wheaton, Keith Smith, Jim Standley and Tim Akers. Scot was preceded in death by his grandparents, Ruby and Gilmor Oswald and Flora and Melvin Nevill and sister-in-law Christine Picou Francis. In lieu of flowers, the family suggests that memorial contributions be made in his name to the Seth Broesche Memorial Scholarship Fund; P. O. Box 464, Snook, Texas 77878. You are invited to leave kind words and fond memories at www.noblesfuneral.com.

William Scot Nevill, 54 of Iola, passed away Monday, May 3rd at CHI St. Joseph Hospital in College Station. Visitation with family and friends will be held from 5:00 &#8211; 7:00 pm, Wednesday, May 5th at Nobles Funeral Chapel in Navasota,... View Obituary & Service Information

The family of William Scot Nevill created this Life Tributes page to make it easy to share your memories.

Send flowers to the Nevill family.